HomeArticlesHistoryHonouring those who served in WWI

Honouring those who served in WWI

Jill Wright shares her experience of researching WWI history in Mulbarton and provides some advice for people who want to do the same in their village.

Many villages have been busy in 2014-18 trying to track down their heroes of the 1914-18 war. As a result, men – and women – who served in some capacity, and those who died, are becoming real people with real families rather than just names on a memorial or a Roll of Honour.

Here in Mulbarton we are fortunate to have a Roll of Honour of the 90 men from the village who went to war, 16 of whom did not return (and 1 died soon after). We now have information on all but three. 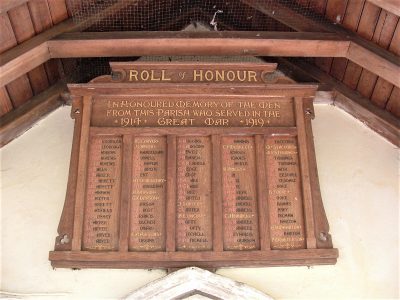 To research those who died we began with the Commonwealth War Graves Commission (www.cwgc.org) where war dead can be searched and a certificate downloaded – for free. If you are lucky you will find details of age at death, regiment and next-of-kin and where they are commemorated. But… it’s not always plain sailing! We have a J. Carver on our memorial who stumped us until a distant member of the family informed us that he is also on Newton Flotman’s memorial, as James Calver… Hey presto – we could download his certificate!

The 1911 census (on findmypast.co.uk – free to use in Norfolk libraries; and on ancestry.co.uk – on subscription) gave more information on many of the men – their age, occupation, place of birth, where they were living on census night, often family members and father’s occupation. The same family history websites have service and pension records for some men (unfortunately many records were destroyed in WW2), medal cards and (in a few cases) war diaries for their regiment on the day they died. That’s how we discovered that Robert Carver’s grandparents were sent his comb, matchbox case, pipe, New Testament, letters, photos and disc in a cotton bag. How real that heart-ache became.

It’s the people who returned who proved more elusive. You can guess some possible men from their age in 1911. The 1918 Absentee Voters Register is a great help. More people got the vote that year but in the chaos of war not everyone serving managed to enrol. This might give full names, home address, regiment and – most importantly – their service number. That is a gateway to service and medal records, etc. Thus we found several men who had transferred to the Flying Corps. And don’t forget those who volunteered with the Red Cross – including many women. There might be a record at www.redcross.org.uk (free to search) and if they lived another 20 years you may find them on the 1939 Register (at findmypast.co.uk and ancestry.co.uk)

The information we have collected so far is at www.mulbartonhistory.org.uk/ww1-men-at-war/. A sister site at bracon-ash-and-hethel-history.webnode.com/men-at-war/ includes lots of photos from the wonderful archive made by the village postmaster.

We are still looking for photos – but local people and other contacts have come up with medals, letters and other memorabilia that make these people come alive.


Have you made any discoveries about WWI history in your village? If so, we’d love to hear from you. Please email [email protected] to share your story.