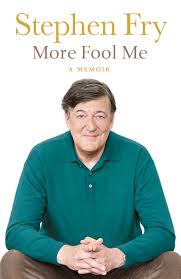 Stephen Fry is of course a national treasure as well as being a Norfolk hero. It feels like there’s probably an episode of QI showing somewhere on UK TV every hour of the day and he has appeared in countless films, TV shows and comedy series – apart, of course, from being an accomplished and successful author.

This new volume of autobiography charts the years of Stephen’s fame in the late eighties and early nineties, when he was apparently a success – acting and writing to great acclaim – but also partying and using substances that allowed him to burn the candle at both ends. Containing extracts from his diaries at the time, the book charts the inevitable consequences of the drugs, the parties, the gambling and reveals a side of Stephen Fry the world hasn’t previously seen.