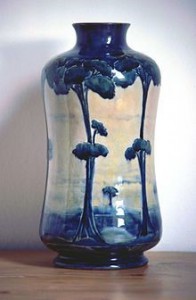 William Moorcroft was born in Burslem, Staffordshire, in 1872. He was the second son of a family already well-established in the potteries, with his father, Thomas, a revered designer and china painter specialising in flower subjects. William was a good student and showed an early interest in art, having inherited his father’s talents, and by the age of 12 he was attending design classes at the Wedgewood Institute.

He went on to study at the Royal College of Art and obtained his Art Masters Certificate at the age of 25. He was offered a job as a designer for a large and influential company, James Macintyre & Co, where he experimented with his own pottery designs. Around 1896 he designed Aurelian Ware which was partly decorated with transfers and partly painted by hand. Moorcroft developed highly lustred glazes and used oriental shapes and decorations, and some of his techniques became closely-guarded trade secrets. He then developed his famous Florian Ware, with heavy slip and a translucent glaze which produced brilliance of colour. William personalised each piece of pottery with his own signature or initials.

In 1913 he married Florence Lovibond, the same year he parted with Macintyres to set up his own pottery factory, Moorcroft, at Cobridge. There he employed staff from Macintyres and the business succeeded, with much being sold through Liberty & Co in London and Tiffany & Co in New York. Meanwhile, he and his wife had two children together; daughter Beatrice and son Walter.
In 1928, Queen Mary made Moorcroft “Potter to the Queen” through a Royal Warrant, which was stamped on his pottery. His son, Walter, took over the management of the factory in 1945 – just before William’s death.

The Moorcroft family eventually sold their shares in Moorcroft on the open market in the mid-1980s. The company is now controlled by the Edwards family, and has been since 1993.

In recent years, Moorcroft’s profile has grown internationally, both in quality and in value. Today, it leads the world of art pottery with its own distinctive design style. Moorcroft is selling more of its magnificent ware all over the world today than it did even in its previous heyday in the mid-1920s, and the Victoria & Albert museum has joined many other national museums with significant pieces of Moorcroft pottery in their permanent collections.

If you are thinking of investing in a piece of Moorcroft then the Antiques Fair at Dunston Hall, Norwich, has several reputable dealers who specialise in this area. They will be happy to advise you on your purchase or help you source a particular piece.
Next antiques fair is Sunday, December 28 at Dunston Hall on the A140 Ipswich Road, Norwich, NR14 8PQ. Open 10.30am till 4pm, admission £3.

For more information please visit www.norfolkfairs.com or call Susan on 07596 436260.