HomeArticlesHistoryChildren’s Education in our region over the centuries

Children’s Education in our region over the centuries

In a brand new history series, Sarah Doig provides snapshots of children’s education in our region over the centuries.

In most modestly-sized parts of Norfolk and Suffolk during the eighteenth and nineteenth centuries various establishments would offer board and tuition for young ladies. The curriculum in these academies was usually far from academic – in contrast from the average private school for boys. They offered to educate girls in all the main social skills and accomplishments such as music, dancing, drawing, foreign languages, needlework and embroidery. Some charged extra for skills taught by visiting masters such as arithmetic and handwriting.

Ann and Sarah Burroughs from Botesdale in mid-Suffolk during the 1790s were daughters of a local tradesman who ran a boarding school for ladies in the village. A wonderful survival of their school is a card which would have been distributed locally, supplementing newspaper advertising. The card was found behind a fireplace during renovations at the former rectory in nearby Redgrave (with thanks to the owners for sharing their find). In it the Burroughs sisters “Return their sincere thanks to their friends, for the support and encouragement they have experienced; and hope, by the strictest attention to the deportment and progression of those young ladies entrusted to their care, to merit their future approbation”. Whilst they state that most of the subjects are included in the price of ten Guineas per annum for those under twelve years of age and twelve Guineas per year for over twelves, the sisters charged more for fancy work or embroidery skills. 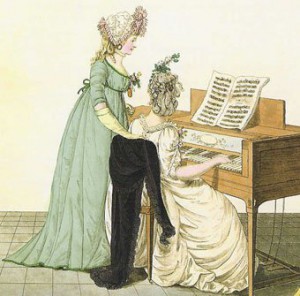 Among a collection of family papers now held in the Norfolk Record Office is a delightful diary written by Elizabeth (Bessie) Starling in the 1840s. Bessie lived and taught at a school for young ladies run by a Miss Woodward in Botesdale and her diary entries give us an invaluable insight into life in such an institution. Miss Woodward’s establishment was relatively small with about eight to ten girls. Bessie regularly gave music lessons and she helped teach her young charges to dance (they had a visiting fiddler to accompany them). She also gave individual Latin lessons.

Many schools like the Burroughs and Woodward establishments often did not survive for more than a decade for one reason or another. Sometimes they had to close temporarily or even permanently due to outbreaks of infectious diseases such as smallpox in the neighbourhood. They were also dependent on a good supply of teaching staff, including those peripatetic teachers who educated the girls in specific skills. Some schools, however, simply closed when the proprietors – often fairly young women themselves – got married, no doubt using all the wonderful social skills they had taught their charges!

If you would like to discover more about the history of your family or house then Sarah can help. Give her a call on 01379 890215 or visit www.ancestral-heritage.co.uk to find out more.